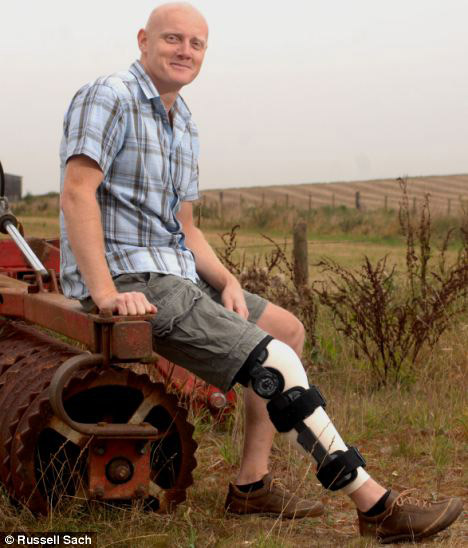 Mr. Johnson said “This is a particularly difficult procedure to perform and on this occasion took over 4 hours to complete. Whilst such knee transplantation is only suitable for a small number of patients this is now a technique that has been successfully undertaken around the world and now in Bristol”.

Mr. Stuart Mayling became the first patient in Bristol and the South West to receive a transplanted knee this week. Stuart is a 39 year old accountant who lives in Wiltshire underwent the ground breaking procedure at the Glen Hospital Bristol. Consultant Orthopaedic Surgeon Mr. David Johnson who specialises in Knee surgery undertook the procedure.

Stuart had undergone surgery of a total removal of his knee cartilage in Cheltenham many years ago. This procedure has now been replaced by keyhole arthroscopy of the knee and repair of the meniscus rather than total removal or menisectomy. Following this operation he was never warned of the long term consequences and returned to competitive sports including rugby, soccer, cricket and basketball. Increasingly over the last few years he experienced more pain swelling and stiffness in his left knee. His doctor referred Stuart to renowned knee specialist and Consultant Orthopaedic Surgeon Mr. David Johnson. Mr. Johnson undertook an MRI scan of the knee and an arthroscopic keyhole examination of the knee in July. It was then that Mr. Mayling was told that despite his very young age and sporting aspirations his knee was painful because of the absent meniscus and early degeneration or arthritis. After extensive discussions it was decided to perform the ground breaking procedure of a knee transplantation to replace the absent meniscus so that the buffer could be restored between the two arthritic bones. The knee transplantation was successfully undertaken in a four hour operation at the Glen Hospital Bristol this week. It was thought that the procedure would have to be cancelled because a suitable graft was not available but the Tissue Unit in Liverpool were able to find an ideal matched graft and speedily process it for delivery on time.

Mr. Mayling was up on his feet with crutches the following day and was able to go home after two nights. Mr. Mayling said “I knew that I had an increasing problem with my knee but I did not want to give in to the arthritis. It is a pity that the consequences of my original surgery were not fully explained to me. However Mr. Johnson explained the options and introduced the possibility of a new knee rather than a replacement or artificial knee at my young age. I need to get back to work in September so decided to opt for a knee transplantation and a new knee. I know that there will be a period of several weeks rehabilitation and physiotherapy but I am looking forwards to returning to the gym.”

• The procedure of “Transplantation of the knee” took 4 hours to complete.
• The procedure involved a surgical team of 8 people with a consultant anaesthetist and an assistant.
• The procedure involved use of a frozen graft of a donated knee.
• The graft was obtained from the NHS Tissue Services Unit in Liverpool.
• Mr. Mayling’s knee was measured from his MRI scan and the measurements matched to the donor knee.
• The procedure was undertaken at the Glen Hospital Bristol.
•The procedure was undertaken using arthroscopy or keyhole surgery techniques.
• The graft was defrosted, cut to the required shape and size and then positioned inside the knee between the bones of the femur and the tibia. The new graft was then fixed in place by sutures.
• The patient spent only two nights in hospital.
• The patient will spend four weeks on crutches and a knee support before returning to walking, and work.
• An extensive period of rehabilitation and physiotherapy will be undertaken after 4 weeks to enable the patient to return to daily activities, driving, swimming, cycling and gentle sporting activities over the next 3 months.
• The patient was a private patient who was funded for the procedure by his insurance company.
• The procedure is currently not available within the NHS in Bristol.

• Knee surgery is now the most common procedure in Orthopaedics.
• Arthroscopy is the technique of keyhole surgery.
• The meniscus is the fibrocartilaginous disc that sits in the knee between the bones of the femur and the tibia.
• When the meniscus is torn this is usually as a result of a twisting injury or a sign of early wear and tear or degeneration in the knee.
• The usual treatment for meniscal tears is to remove the tear leaving the remaining meniscus intact. Where a complete segment of the meniscus is removed it is not uncommon for patients to rapidly progress to degeneration or arthritis as a result.
• The meniscus should where possible be repaired rather than removed.
• Where a meniscus has been completely removed in a young patient who consequently has premature degeneration and pain, a meniscal transplantation can be considered.
• In a meniscal transplant the new meniscus is sutured into place during an arthroscopic procedure.
• The new knee is obtained from the NHS Tissue Services Laboratory in Liverpool. The graft is cleaned and deep frozen and carefully matched for size and age before transportation.
• The knee is the most common area to be injured as a result of sport.
• Since 2008 the knee is more commonly replaced than the hip joint.

Surgeon: Mr. David Johnson MD is a Consultant Orthopaedic Surgeon based in Bristol for the last 15 years. He is internationally renown and widely published in the specialised area of Knee Surgery. He is the senior British surgeon in the Anterior Cruciate Ligament Study Group based in the USA, he has written text books on Knee Surgery and is the only British Surgeon on the Editorial Board of the world’s foremost journal for Knee Surgery and Sports Injuries: The American Journal of Sports Medicine. Mr. Johnson trained in Oxford the USA and Australia before returning to Bristol 15 years ago to practice at the Glen Hospital.

Mr. Johnson said: “This is a particularly difficult procedure to perform and on this occasion took over 4 hours to complete. Whilst such knee transplantation is only suitable for a small number of patients this is now a technique that has been successfully undertaken around the world and now in Bristol. Whilst this is the first procedure to be undertaken in Bristol it is now be available to patients who fit the special criteria for a new transplanted knee. I should thank all the staff at the Glen Hospital who worked hard to make this happen safely and successfully”.

Hospital: The Spire Hospital Bristol is known as the Glen Hospital and was previously the BUPA Hospital Bristol. The hospital is the largest private Hospital in the South west with four operating theatres and a fifth due to open in October 2009. Over 15 Orthopaedic Surgeon commonly work at the hospital undertaking a wide range of Orthopaedic surgical procedures.